LAUNCH OF THE D-MON SERIES 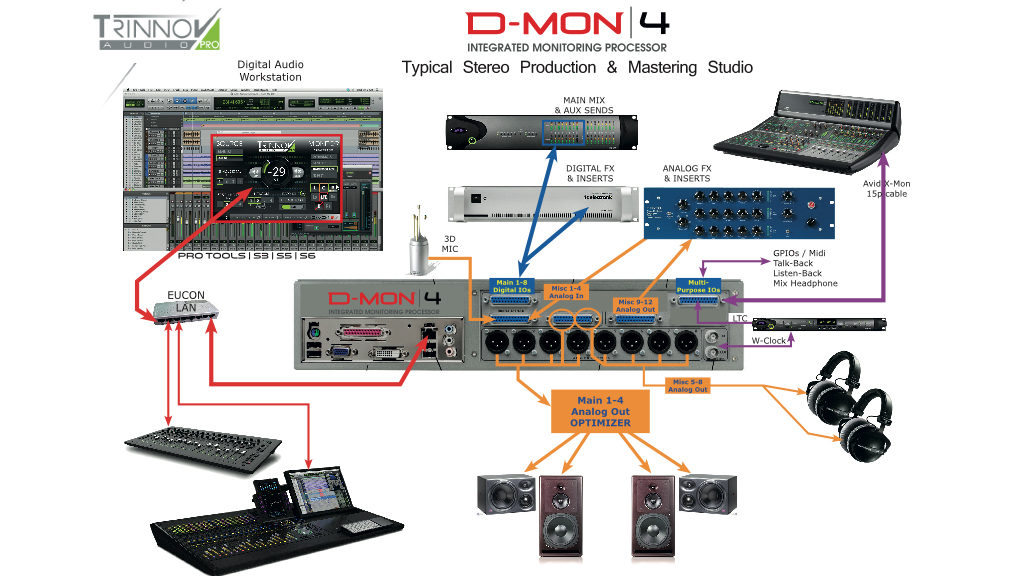 Trinnov Audio is extremely proud to announce the launch of the D-Mon® Series, a brand new range of Digital Integrated Monitoring Processors. Designed from the world wide acclaimed Speakers-to-Room Tuning technologies developed by Trinnov Audio during the last 10 years, these new products will take professional monitoring processing to the highest level.
The first units will be introduced to the market during the NAMM Show January 2015, 22 to 25 in Los-Angeles, USA. The demonstration will take place on the AVID® stand (#6400 Hall A), along with S6, S5 or S3 consoles, as well as the Trinnov Audio corner.

Thanks to the partnership with the AVID® 3rd party program, the D-Mon® Series has been developed primarily to meet the Eucon protocol specifications and provide Avid customers with a comprehensive alternative to the X-Mon analog processor that has been used alongside their control surfaces to achieve their monitoring functions.

Yet, in our world of fully digital mixing rigs, the need of a digital unit able to connect directly to the DAW is very strong, especially when most of the studios just want to benefit from both domains and remain compatible with legacy consoles, control surfaces or DAW’s.

D-MON SERIES KEY POINTS
– Based on worldwide acclaimed Optimizer® for perfect acoustic tuning of multiple stereo up to 7.1 speaker sets, with comprehensive functions and processings for advanced monitoring ;

– Compliant with Avid control surfaces, including Eucon (S6, S5, S3), and X-Mon Midi (D-Control & D-Command) – Ready to interface with Yamaha, Lawo, Calrec,… and many other protocols ;

– Outstanding sonic performances and processings from the world leader in room correction.

MUCH MORE THAN JUST ANOTHER MONITOR CONTROLLER (PART I)
Preliminary specifications subject to change without prior notice.
Monitor control could look very simple to many, but when it comes to managing all the various mixing situations that a sound engineer has to face day after day, you have to provide him with as much power and flexibility as you can. Not only does he have to switch from monitoring 7.1 to a stereo mix without any loss of transient, power response or bandwidth, but also to provide musicians with different foldbacks, communicate with them, and/or run a special sub-group into external gear as an insert or connect, in seconds, the producer’s smartphone to share his latest song, and so on…

The D-Mon Series is specifically designed to combine power, fast-and-easy usage and flexibility:

1. The D-Mon|8 provides 16 Digital Inputs (AES), enabling any surround sound engineer, drive not only his main mix but also all feeds (like aux sends, sub-groups or stems) within the best possible resolution and sample rate (up to 192kHz);

2. He can also plug an 8-channel digital processor (or a chain of external outboard) as a switchable digital insert thanks to the “Alternate 8-DigIO” and make instant A/B comparisons;

3. Any of these inputs can be routed individually within a comprehensive Switching Matrix which addresses all possible internal processing and/or direct outputs (analog or digital);

4. The D-Mon|8 also comes with 8 Analog Line Inputs able to be assigned as the Main Mix, Cues, Talk-back or just used as external sources to be converted to digital for whatever reason;

5. Attached to the Switching Matrix is a 16×16 Summing Matrix which can be fed with any of the signals available, whether analog or digital: in any number of combinations to build up a mix of stems, a sum of aux’s with sub-groups or a downmix,… it’s just infinite !

6. To route all possibilities out of the D-Mon, the user can select any of the 8 Analog Line Outputs (like running 4 mix’s for headphones), the 16 Digital Outputs (AES), not counting the 8 Optimizer Dedicated Outputs which normally go to the analog loudspeakers’ (or it could be digital!).

7. A special “Functionalities Matrix” helps the user to allocate any of the 8 possible Cues to any output or group of the physical inputs or the summing buses available, and to assign which of them is feeding the Main Mix or Alternate Mix. Thus any input can be the Talk-Back or Listen-
Back and so on!

8. Multi-Purpose IOs (MPIO) are handled by a Sub-D 25pin connector which combines point-to-point D-Command & D-Control, control cable with (Midi, Talk-Back, Listen-Back,
Headphones) with GPIOs and one LTC input. Of course the system can receive and transmit word-clock on BNC connectors.

9. The Eucon Protocol is supported and connects directly to the DAW where a dedicated D-Mon Control Panel is installed as an application on Windows or Mac OS.

10. The D-Mon|8 can also run as a stand-alone unit without the need for the DAW or console and can be directly controlled and setup by simply attaching a screen, mouse and keyboard and soon from any wifi remote tablet/smartphone/computer.

11. Whether you mix your production in stereo or a surround sound, you’ll benefit from the same amazing OPTIMIZER® features, which can tune up any set of loudspeakers to the perfect acoustic pitch for any given mixing room. This makes the D-Mon Series the world’s first Digital Integrated Monitoring Processor that gives the sound engineer the certainty that his mix will translate on any sound system.

12. For those interested in running up to 192kHz, and/or metering and processing to the Loudness standard (up to 7.1), there’s the option to host the Smart-Meter® features, including the unique Time-Code Aware tracking, its unbeatable archiving and traceability system by choosing the D-Mon|8S.

MUCH MORE THAN JUST ANOTHER MONITOR CONTROLER (PART II)
Setting up an appropriate and comprehensive monitoring system is more than just selecting the right pair of loudspeakers. The studio owner knows that the acoustics, the console, the constantly changing needs of his customers, and the even more challenging evolution of technologies and working methods makes the complex decision to decide on the right investment.

The D-Mon Series has the adaptability in its DNA, to include future provision for the growing audio-over-IP transmission technologies, thanks to its internal processing and motherboard which already hosts RJ-45 connectors.

Future software, processing and firmware developments will be easily and painlessly implemented from customer feedback as well as Trinnov Audio’s constant research for a better audio-professional experience. The D-Mon Series is highly adaptable and open to more control protocols thanks to its remote D-Mon Control Panel that can accommodate legacy formats (like Midi) as well as emerging formats such as (OCA or EmBer+) and work with virtually any kind of recording/production/post software and consoles.

And again, thanks to the power of the best room correction in the world, the D-Mon Series is not only a system that can last by itself for many years, but will remain able to welcome any new loudspeakers or transduction technologies –whether they are analog or digital–, and ensure that the best of their specifications translate perfectly in an existing mixing room.

It looks like some devil has decided to democratize the best sound that only legendary studios were able to afford (maybe)!

All of this is going to reassure many studio owners who will no longer slave to a vertical implementation of only one manufacturer, but will have complete independence when it comes to installing the most flexible, best sounding and accurate monitoring system.

In 2014, the Hi-End division launched the Altitude preamp & processor which has received a strong welcome from the market, thanks to its integration of Atmos, Auro-3D and DTS immersive sound technologies with the Optimizer, and a large number of IO genre going from analog to HDMI, and including AES, Tos-Link among others.

The Professional division has a wide variety of customers like BBC, France Television, Fox Studios (LA), Imagica (Tokyo),… who run the Trinnov Audio processors whether in production, post-production, film mixing, OB-vans and music recording facilities.
Beside the Optimizer technologies, Trinnov Audio has launched the Smart-Meter® for accurate loudness metering and processing, thanks to its world-wide unique Time-Code Aware feature.
The launch of the D-Mon Series is seen to be the very next revolution in professional monitoring.